In this project we add plane and triangular mesh object types to our ray tracer.

We have a minor addition to the XML scene format to support new object types: plane and triangular meshes. The plane object is a square with 2 unit lengh edges. It is placed at the origin and the plane normal is aligned with the positive z-axis in object coordinates. The triangular mesh is specified in an external OBJ file. The name of the object is the filename of the OBJ file, which should be placed in the same folder as the scene XML file. 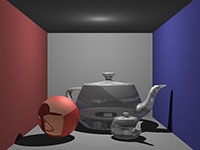